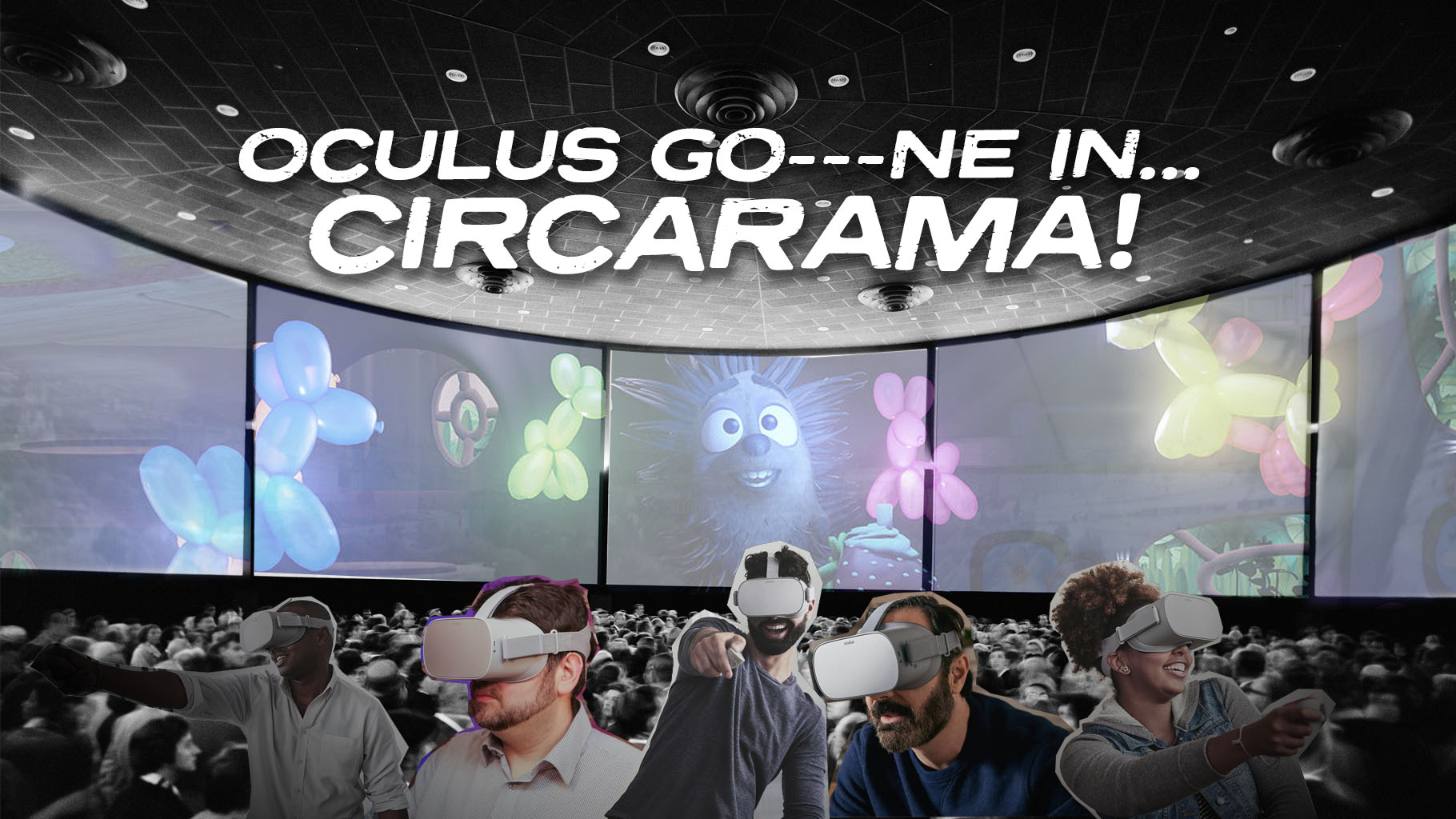 Some ideas seem so good that in the second that you hear them, you knowthat they will be “The Next Big Thing.” These are ideas you are convincedwill change the world.

And then a couple years later… they are no longer available.

We can now add the Oculus Go to that list.

On that same list of great-but-defunct ideas is the Circarama, which preceded the Oculus Go by about 65 years. Both inventions are now relics of the past, and both were bold attempts at new ways to present stories.

Last week, the team at Fair Worlds discussed the Oculus Go’s recent discontinuation and its similarities to the fate of Circarama theaters.

Before we dive into this, let’s start at the beginning.

In response to the shiny, new, three camera, film format of the Cinerama, Walt Disney, in the parlance of our times, had a “hold my beer” moment. (Fun fact: Walt actually drank Scotch Mists.)

Adding eight more cameras to Cinerama’s three, Ol’ Walt revamped the format with the premiere of his Circarama in 1955, at Disneyland.

The Circarama was mounted on top of a car and used footage from 11 16mm cameras. To view the Circarama’s first film, A Tour Of The West, audiences stood in the center of a round room and watched as the film was displayed on 11 movie screens that wrapped around the perimeter. Viewers had to constantly turn around to figure out where to focus their attention. Some had to hold onto poles in the auditorium to center their equilibrium in order to keep from getting nauseous. (Does this sound familiar?)

Eventually, the Circarama became Circle-Vision 360 and continued to show nature and travel films at Disneyland until ’97. Outside of the park however, it had no utility, and all proclamations that it was the next big thing fell flat. Do you have a Circle-Vision 360 theater in your town? Case in point.

The answer to why larger adoption never occurred mirrors some adoption failures with the Oculus Go.

Both innovations put the user in the center of a story, and surrounds them with 360 degrees of visuals — and more importantly, filmed visuals. Even the camera systems are almost identical.*

In technical terms, both are what we call 3DoF (three degrees of freedom). This means that the user has rotational camera control and can look all around them, but they cannot walk into the image or interact with it. With 6DoF, the user has complete control. This is best demonstrated with the following Gif: 3DoF is above, 6DoF is below.

The Go is a 3DoF experience, and I have always referred to a 3DoF experience as you being an observer. With 6DoF, you get to be a participant. That is the thing with VR - it’s the participatory experience that makes it incredible.
— Ross Safronoff , XR Developer at Fair Worlds

Despite the happy-go-lucky marketing, Oculus Go users should be seated for safety purposes. Even as a device for just watching VR and traditional films (watching stereoscopic 3D movies is an underrated use case for VR), the Oculus Go has a risk of inducing nausea. In fact - a huge factor in the quality of the experience is determined by what one is sitting on.

Imagine sitting on a couch and trying to watch a 360 video. If that video truly utilizes all 360 degrees, it will be physically uncomfortable to turn all the way around. Even if you are in a swivel chair - which is the best option for 360 videos - you will still have micro head movements forwards and backwards. Eventually, this could cause nausea due to the disconnection with your eyes and inner ear.

The Oculus Go didn’t die because of advancements in immersive technology, it died because of stagnation in chair technology.
— Brad Parrett, Creative Director at Fair Worlds

The issue of needing a specific chair to properly enjoy a 360 movie was made apparent when we unveiled a piece that our Creative Director, Erik Horn, produced for the NYTimes a few years ago. He proudly placed a Samsung Gear VR (another R.I.P.) on his mother, who was sitting on a couch. She quickly complained that she could not see what was behind her…and took the headset off.

We learned from that lesson when we created The Monarch Effect in collaboration with the Environmental Defense Fund (EDF). We opted to use the woefully under appreciated VR180 platform from Google. Creatively, this is more akin to the largest IMAX 3D movie you have ever seen, and has some minor interactive capabilities. It currently is still on the Oculus Go storefront for free and we hope to bring it to the Quest in 2021.

Though it is being retired to the trophy case of obsolete VR Headsets (where there are a few), we have to applaud the Oculus Go. The little grey headset did a great job in setting a precedent for what consumers were going to want and need. It introduced a new audience to the concept of VR, and like a good showman, left them wanting more. While it lacked technical prowess and more immersive, full body experiences, it brought a lightweight comfort-ability and made waves as a wireless headset.

And maybe most importantly of all, it signaled the end of the Google Cardboard era, as it did not require a user to insert their phone into a frustrating “contraption.” (Though the idea of the cardboard was, and is, brilliant, the execution was maddening)

What’s interesting in the history of the Oculus Go is that it was an R&D project. A lot of women were involved in it, and the straps came from bra straps… to make it feel comfortable. [The Oculus Go] feels more comfortable (to me) than the Oculus Quest when worn for long periods of time.
— Todd Little, Lead UX Design Engineer at Fair Worlds

Moving into the future, you can see the Go’s influence on the Oculus Quest (our current headset of choice) design-wise, and you’ll surely see its positive aspects emulated in future headsets to come. Ultimately, the Oculus Go will have a large place on the technological timeline of immersive storytelling.

We joke around as a company, but there are going to be bumps on the road to new immersive reality. In a few years, we’ll probably be reveling in the antiquated notion that our headsets were larger than sunglasses and required controllers at all.

In our current, socially distant isolation, we still would not mind going to a theme park at some point again…sigh. Even if it has to be in yet anotheroutdated format, Cinerama.

*We realize that the Oculus Go featured more content than just 360 and 180 degree videos, but for the sake of this comparison, we focused on them as they were the predominant use case. We love(d) experiences like “Virtual Virtual Reality” from Tender Claws and the output of the Google Spotlight Stories, but that is for a different post.