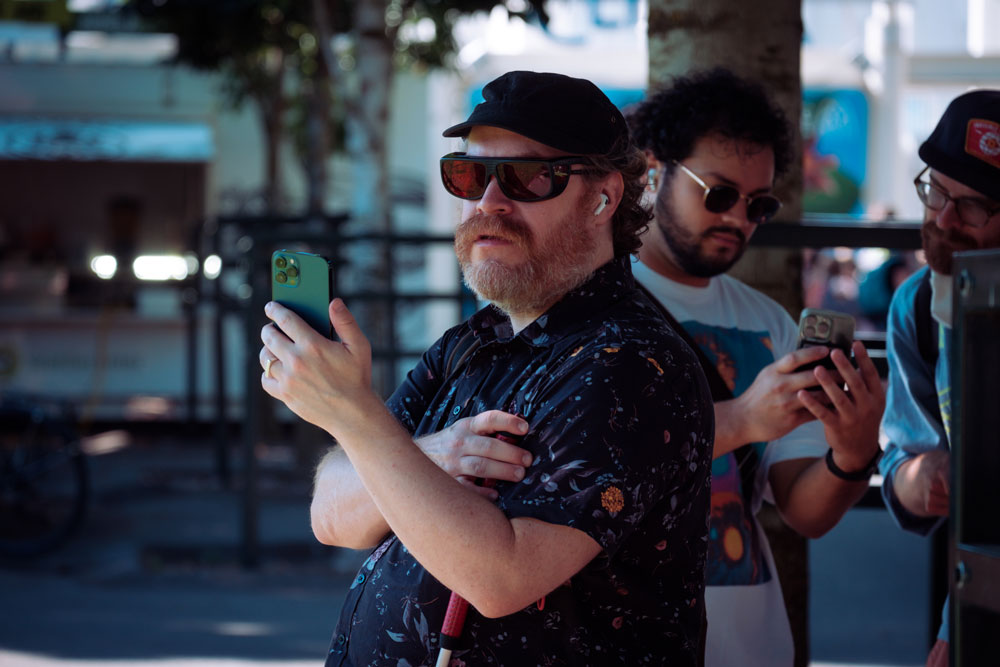 All together at the Fair

For those of us who were hired sometime between 2020 and today we only know our coworkers by their tiny little heads, and glitched out voices existing only inside the zoomiverse.  Many of us have adapted to working from home in our PJs and having water-cooler conversations over Slack, but let’s face it, collaborating with your coworkers in person can be much more meaningful. This August, the Fair World's team came from all corners of the country (myself from Chicago) to convene in lovely Seattle to meet as a group for the very first time. Who knew that handshakes and hugs could do more for team building than trust falls and karaoke?

The big reason for the retreat, beyond team building, was to test our new upcoming location based, custom AR app, Space-Time Adventure Tours, as a group.

For the past two plus years, we have been developing Space-Time Adventure Tours. The app is an augmented reality walking tour, site specific to the Seattle Center, which was home of the 1962 World‘s Fair. The story of our first tour focuses on this fair, subtitled Century 21 and its ambitious vision of the future. It was the unofficial harbinger of the space age. I mean, NASA debuted there, you can’t get any more space age than that.

Inspired by the pioneering vision of the World’s Fair, Space-Time Adventure Tours has an ambitious approach to education, entertainment, accessibility, AR, and even comedy. We think it’s as fun and weird as the giant birthday cake made exclusively for Paul Bunyan that was on display at the fair. We couldn’t help ourselves and made it in AR!

So, I’m blind, and accessibility is incredibly important to me. My iPhone is the most powerful piece of adaptive technology that I could possibly own. I use the VoiceOver screen reader link to read emails and text messages, navigate the Internet and Instacart. I use wayfinding apps like Soundscape to travel about independently. I rely on alt text for image descriptions as well as audio descriptions to experience film and video. (More on how Fair Worlds is thinking about this topic soon). These things are very big parts of blind culture, and so by default are very important to  Fair Worlds.  In Space-Time Adventure Tours we included all of these elements into the story, the gameplay, and the functionality of the app.

We also used spatial audio, very forgiving button fields, and swipe/tap gestures that are familiar to all Apple VoiceOver users. The gameplay is clear and simple for blind users…(no rage spamming here). A blind user can interact with the app using voice over. This may not seem like a really big deal, but up until earlier this year, anything that was developed in Unity was not inherently accessible with the iOS screen reader. There is so much to say about access and the lack thereof in the 2 modern game engines…but that will have to wait for another blog post.

The biggest accessibility challenge that we faced with Space-Time Adventure Tours was developing a way for non-visual users to navigate the grounds of the Seattle Center independently and safely. The approach that we took was influenced by Microsoft Soundscape, which places audio cues and labels in 3D space. This creates sounds in the direction of points of interest in your surroundings. Unfortunately, there is no Soundscape SDK that we could integrate into the app at this point, so we had to create our own navigation system. By way of GPS, I designed a bell sound to attach to each point of interest along the tour. While navigating the tour with spatial audio, you can hear the bell ding from the direction of the next point on the tour (headphones necessary). If the next stop is behind you and to the left, the bell is auditioned from that position. So you just turn your phone around until the ding is positioned right in front of you, and then you know to start moving forward. Like Soundscape, we added verbal GPS notifications that not only tell you how many feet away you are from the next stop, but also alert you to your surroundings. If there is a dubious portion of the path, the announcement will let you know about it (all in the cheeky-fun style of the tour itself). It turns out that even the sighted people that tested the app (a.k.a. everyone else at Fair Worlds) found the GPS directions to be very helpful. Isn’t universal access awesome?

As I mentioned earlier, I live in Chicago. I had never even been to Seattle before, and my only experience with the Seattle Center was through virtually working on this project. It has been possible for the devs to virtually demonstrate the gameplay to me remotely. Everyone has gotten really good at describing images and videos for me. I can listen to someone testing the gameplay, and I can tell if the sound design worked or not. I can obviously hear all the little bleep bloop sound effects and spacey little tunes I made, and judge if they fit into place nicely, but there was absolutely no way that I could tell if the screen reader or the wayfinding functions worked without being physically on site. Although the developers at Fair Worlds are superstars, and they know how the feature should work, there was no account for how usable it would be to a blind person. As they say, never send a sighted person to do a blind person‘s job.

So there I was, at the fabled Seattle Center with all of my wonderful coworkers ready to take the tour, crossing my fingers that access will be granted. What do you know? The thing worked! VoiceOver worked! The bell rang from the right spot! And I was on my way to the wet and wild International Fountain!

During my tenure as an accessibility adviser, I have tested numerous apps, websites, and museum exhibitions that have ended with me shaking my head and handing the developer a very long list of demands… but in this case there were smiles for miles, and only a short list of tweaks and enhancements as we get close to launch.

As the saying goes, access is love and love is complicated. The more you know about the experiences of disabled people, the better your product will be. It is scientifically proven and it makes you a nicer person filled with empathy and understanding towards others.

As part of the company retreat I had the opportunity to talk to the team in-person about the modalities of accessibility. I spoke about the way that I do things, and the way that other blind people do things. How blindness is a spectrum, how everybody’s phone and computer has accessibility tools built-in to them. I demonstrated how my white cane makes a bunch of cool sounds when I bang it across stuff. Most importantly we talked about how not every idea for adaptive technology is a good one (see the virtual cane, for instance).

Space-Time Adventure Tours is coming soon, and while we are still finalizing its features, we followed the golden rule of access - include it on day one, because throwing it in at the end will be as hard as selling an ‘84 Mazda CX-7 to a tree frog and as tacky as owning an 84 Mazda CX-7 in the first place.

For more on Space-Time Adventure Tours click here. If you are blind or visually impaired and would like to test the app on site please reach out me through the contact form on the Fair Worlds website.