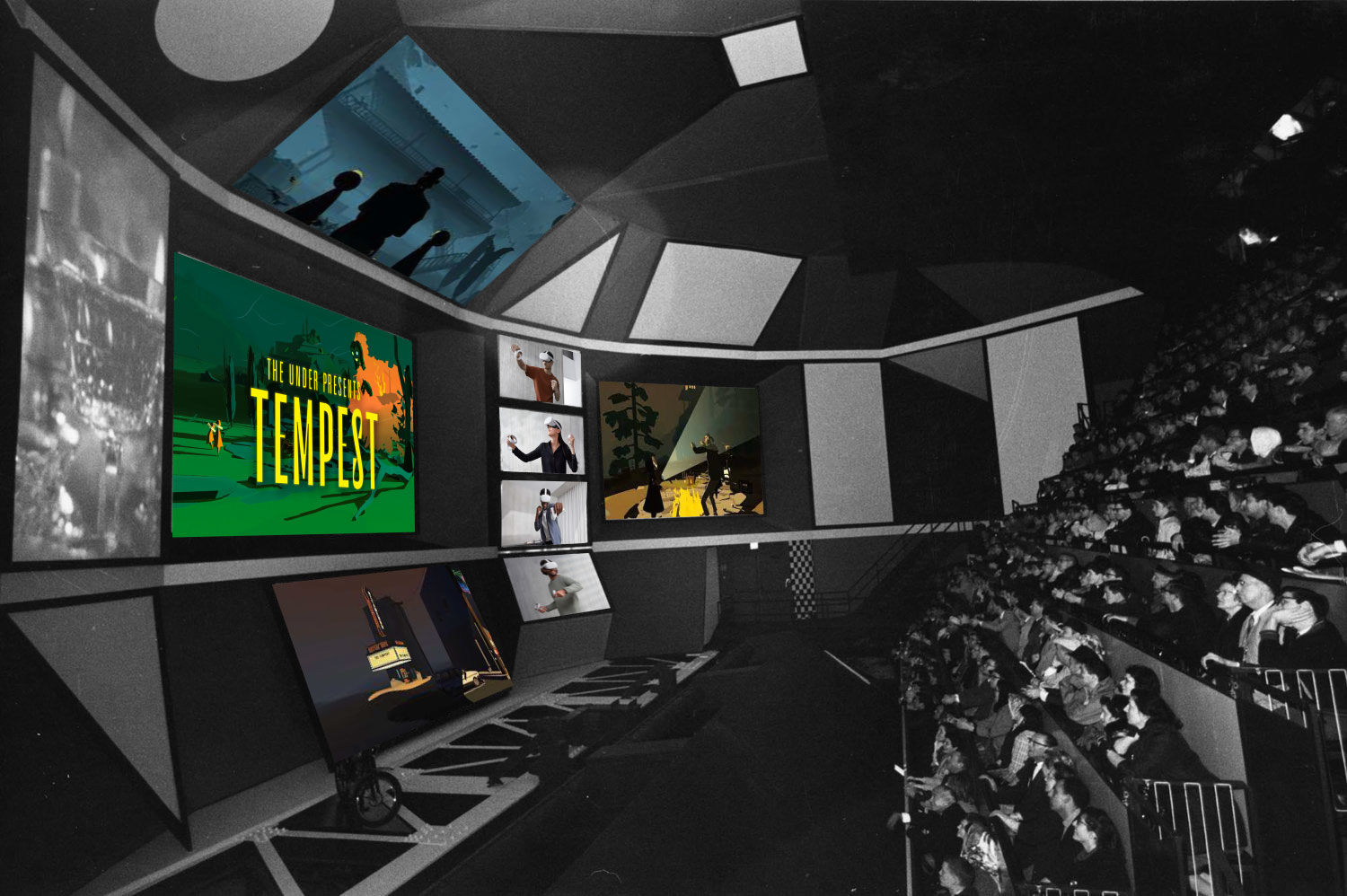 One of the byproducts of a year spent indoors has been an accelerated interest in remote entertainment.  “IRLive” entertainment will be coming back in a giant way (and hopefully sooner than later) but it’s safe to say that the hunger for at home technological amusement is only going to keep growing.

Tender Claws has taken the interactive theatre experience to VR with their “The Under Presents” series, their latest production being The Tempest.

A few of us here at the Fair Worlds team took the trip and have been thinking and talking about what we experienced there, our thoughts on multi-player immersive experiences, and where we think things could be going in this medium.

Ever since first trying VR, and witnessing the kind of full body embodiment it so easily conveys, I've been convinced of the potential of shared experiences in immersive environments. This could be with friends and family in a Theme Park type experience, or with trained actors like you would in immersive theater. About 5 years ago my wife and I took a trip to NYC for our wedding anniversary and I booked us tickets to the newly opened up Ghostbusters VOID experience (RIP) and the immersive theater sensation, Sleep No More.

I was blown away by both, even though Sleep No More gave Kathy a mild panic attack when they intentionally separated us at the start of the show. They both were completely immersive, unlike anything we had ever seen, and we experienced them TOGETHER. They provided things that are just impossible when it comes to ‘at home’ VR. Real world props that are tracked into your playspace, 4D effects like wind, water and smell, and in the case of Sleep No More, a troupe of professional actors bringing a story to life all around you in a fully art directed multi-level building. Together, we experienced a whole new world of environmental storytelling.

Inspired by that trip I pitched similar experiences to our clients. AMD let us employ 4D effects in one of the very first VR experiences we created (at that time at Hunt, Gather) and Vertiv funded a multi-user VR tour prototype that simply was too ahead of its time.

We continue to believe in the power of shared immersive experiences, and when we heard about Tender Claw's The Tempest, we couldn't wait to experience it for ourselves.

Being able to go through a shared immersive theater piece, especially during quarantine, was intriguing to the whole team. Purchasing the tickets was even an immersive experience. Unable to simply go to a website to book your time, the experience requires you to load the Tender Claws VR app "The Under" and navigate to a lonesome and mysterious ticket booth to get your ticket. It does a fantastic job of setting the stage for the show.

After buying tickets from a box office complete with bored box office attendant, you are transported inside to a virtual baroque theater complete with balconies and other audience members milling around.  An announcer tells you that the show is starting soon and you are given time to explore and play with the really well done teleportation mechanics.  You and the other audience members taking off your ‘face’ while letting you disembodied forms catch up.  That may sound horrific, but the way it comes across is really quite charming.  You and the other audience members can’t speak, but there is no doubt that these are other real people from all over the world that you are interacting with.

When the show begins you are taken to a lobby where you "meet" your fellow theater goers and realize that you will not only be witnessing this performance, but also taking part in it as an active participant, though without being able to speak. This is a creative choice and limitation I loved. Social VR experiences can be quickly ruined by bad actors (the behavioral type, not the ones on "stage").

Although I guess it could be argued that the lobby experience is really part of the show, the experience starts when you are transported near a campfire and introduced to your actor/guide .  A real actor under the guise of VR avatar excitedly introduced herself with manic theatre kid energy.  Engaging directly with every member, she led us through a bit of a mechanics exercise giving something of an example of the world and what we were going to experience.  Depending on the time of performance an audience member will get a different actor making every performance a slightly different experience.

From there she teleported us from lush atmosphere to lush atmosphere letting us wander and explore while pulling us back in with simple games and performing portions of the Tempest.  Perspectives and scale in each scene were played with. Some areas had the audience giant looking on a small ship while others had giant spirits of nature floating around shouting fiery indictments.

To be honest I don’t know how much Shakespeare I really took in. A lot more time was spent  on directions and cajoling than the words of the bard.  That being said I don't know how much iambic pentameter time I have in me to begin with.  Still, without a working knowledge of the play I was a little lost as to why I was in certain places.  It was an enchanting experience overall but my immediate thoughts were of other directions I could see the interactivity going. I enjoyed the scenes but playing a more integral part in the story would be great.  Crime scene investigation maybe? An angry police chief screaming that I’m “this close to losing my badge”?

The Under is onto something really great and I’m excited to see where they go next with it.   It must be doing pretty well because all the shows were sold out 2 weeks in advance.  I will happily buy another ticket for the next show they put on.

I did not like how the show ended - my group went into a multicolored, flashing disco room that was very disorienting before fading out into the theater lobby. It seemed random, especially when compared to the natural setting of the rest of the experience.

I think we will start to see more and more interactive experiences, as it offers excellent replayability. The Tempest might be the most well-known one, but there are others that are equally as engaging. For example, during Sundance this year, one of the best experiences was "Tinker" - an somber interactive theatre experience about a grandfather who develops Alzheimer's. "Dr. Crumb's School for Disobedient Pets" is another fun one involving puzzle solving and team work within a team of four.

As an introvert, I actually liked that there was no mic support. There was anonymity that allowed me to “perform” without worrying about it. I was with a group of two others and the main actor - making us a group of four. It was a little hard to distinguish us “spirits” apart except by height. I thought it was a nice touch of giving us names at the beginning. It felt very much like I was in a children’s daycare and we were being handled by a childcare worker as an actor. To that end, I started to see the limits of the system about half-way through the production. It became very clear that this was a fairly linear storyline and we didn’t have a huge amount of impact on the story. We had lots of agency, but little impact. My favorite moment was bringing items up to the actor and having them tell stories about it.

I would like to compare another live VR theater piece I got to participate in called Tinker VR. It’s by my friends Lou Ward, Shimon Alkon, and their team. It’s based on Lou Ward’s grandfather who had Alzheimer’s and Lou’s growing up with him. You play as a grandchild and a live actor plays the grandfather. You play through four stages (toddler, 7-year old, teenager, adult) and at each stage the grandfather suffers more from Alzheimer’s and is more forgetful. Unlike the Tempest, the mic is supported and even though I’m introvert - I felt comfortable and primed to act the part. Part of the reason I felt primed was that I knew Lou and Shimon were part of the audience even though I didn’t know the actor, so I felt comfortable performing. It was a very powerful experience - I felt like I was contributing to the production rather than being a prop. For example at the beginning, the grandfather interviews you and asks about your interests. I mentioned I like reading and that became an element of the production that kept being brought up. I think that’s really powerful when the production becomes tailored to you and that you can have a real impact on the direction of the story. The Tempest was excellent for giving you agency, but was limited on impact of the story. Tinker VR required that you step into being a full actor in the production, but allowed you to have both agency and impact.

I feel it would do the show a disservice to spoil too much more of what happens in The Tempest, but I can’t recommend enough trying it when they hopefully revive it later this year. And when they do I can offer these thoughts and suggestions:

Be aware that during the show you are asked to perform many different types of physical interactions - so a large and preferably private playspace will make for the most uninhibited experience.

The audience is always random and anonymous, so you won't know if you are in the same "showing" as your friends, even if you buy tickets at the same time.

It is definitely worth it to try multiple viewings. I've 'been' twice and had a different actor both times, and had two very unique experiences.

It's incredible how quickly you can recognize different people from body movement alone.

We're excited to start bringing this kind of "multiplayer" functionality to our own work. We've been able to implement it in some of our internal projects and it really is magical and encourages collaboration and communication in surprising ways.